Battle of Taxi on demand business in India 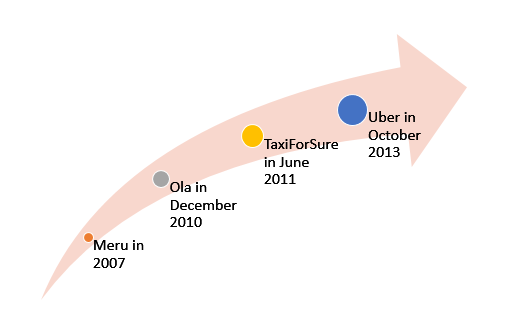 Every marketplace has a blockage point. For the online retailer, it is consumers who continuously seek discounts leading such firms to go for venture capital’s money. While in the case of Taxi on-demand businesses like Ola, Uber, Meru cab, etc. it is the driver. Indeed, the future of the taxi business is bright as they follow an amazing business model where they don’t have their drivers, but they connect available drivers with a customer who needs rides using an on-demand tech platform. There are many drivers licensed to drive vehicles but they are not quality drivers, and those who are good ones are not loyal to one company.

For India’s top 3 Taxi on demand business, Ola (run by ANI technologies), Uber, Meru, it has become a contest to get driver supply. Ola and Uber have back of venture capitalist so throwing other operators out of the competition by offering incentives to a driver and discounted price to customers. To match those giants, small players, and radio cabs, are making collective efforts. If you go to Mumbai CST station, you will see the strong association of taxi drivers who won’t let Ola or Uber enter in their area. India Taxi on demand business is growing 20-25, but organized taxi sector accounts for 4-5 only.

In 2015, Ola and TaxiForSure (acquired by Ola) combined had the highest market share of 80 in Indian Taxi business; Meru had 12 while Uber had just 4-5. Uber now claims to reach their market share to 40 from just 4, while Ola claims to have 85. As there is two type of market share online and offline, it’s hard to say exact numbers. Startups are all about number games as they have to use it very smartly on their advantages to get investors.

Ola is made considering only Indian market while Uber has customized its model for India a lot compared how they run in the US. Uber introduced cheaper UberGo hatchback vehicles, cash-based payment mode specially for India to match up Ola. Both Uber and Ola let user book ride through app only. While Meru runs on hybrid model letting user book a cab by the call center, app, website, etc. The way Ola struggled to stay live in China against local player Did Kuaidi, Uber now struggles against Indian local player Ola.

Taxi companies use fundraising to sustain in this war. More they raise fund more they can provide a discount to users. More discount users get, more they prefer to ride and more users coming in, more trips per hour drivers get. So Ola and Uber tries to drop down the price to such level that small players can’t afford to operate at a price and are thrown out of the business as it happened in the case of TaxiForSure. As Ola has a fund of Softbank and Uber has a fund of Google Ventures, both are in competition of giving maximum incentives possible to drivers. While Meru believes they don’t need to provide incentives to the driver like Ola and Uber and still their revenue is higher than competitors. As of now Meru is burning very less cash for promotions but it has to more in future to stay in the market in this tight competition. Both Ola and Uber have legal tussle regarding many issues like they violate the regulatory law of running vehicles only CNG by using diesel instead as CNG is costly for drivers.

As of now, whatever is the situation, drivers are earning more and customers are reaching the destination with the lowest fare, hence entrepreneurs turning to invest and developing an app like Ola, Uber, Meru Cab, etc. for their business as it ensures stable returns in the stiff market conditions. So let’s wait and watch for the upcoming future.